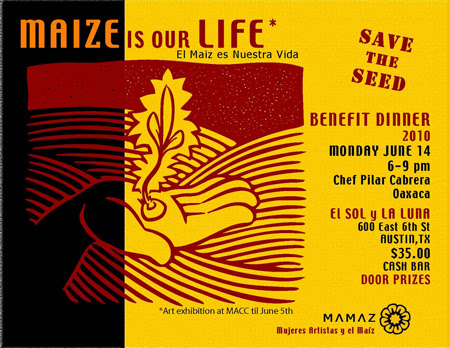 
By pure chance, I heard that my colleague Claudia Zapata was the curator of "El Maíz Es Nuestra Vida/Maize Is Our Life," a traveling contemporary art exhibition that features art from women concerned about Mexico's native maize seeds. This exhibit was created by Oaxaca's MAMAZ Collect­ive (Mujeres Artistas y el Maíz), a nonprofit women's arts organization that strives to raise awareness about our environment and our native seeds through art, food, and culture. Concerns about the fact that many varieties of maize are in danger of extinction due to the arrival of genetically modified seeds, as well as the GM seeds' effect on cultural memory and biodiversity, are at the heart of the exhibit and of MAMAZ's mission. If you missed the exhibit during its recent time in Austin, you'll be able to catch it in San Antonio in the fall. In the meantime, you can help MAMAZ's various initiatives, including "El Maíz Es Nuestra Vida," by attending the fundraising dinner at El Sol y la Luna this Monday. What better way to emphasize the importance of biodiversity than through our foodstuffs?

The evening's highlight will be the authentic five-course menu by guest chef Pilar Cabrera, executive chef and co-owner of the highly acclaimed downtown Oaxacan restaurant La Olla and La Casa de los Sabores cooking school. Cabrera, of indigenous Zapotec heritage, learned the basics and many secrets of the Oaxacan kitchen from her maternal grandmother. She has a degree in food sciences and nutrition from a university in Mexico City and worked for three years in research and development for the food giant Herdez prior to embarking upon her career as a chef. Her belief in slow food, the use of organic meats and produce, and a holistic approach to her work have earned her the respect of many – including celebrity chef Rick Bayless, who sends his staff to Oaxaca to learn from Cabrera at Casa de los Sabores – and features in publications such as Bon Appétit and The New York Times. 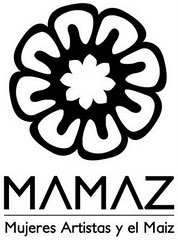 To complement her celebration-of-corn menu, there will be a cash bar featuring Mexican beer and El Sol y la Luna's signature margaritas. In addition, there will be door prizes and a raffle with items donated by women in the collective such as jewelry from Luisa Restrepo, a woven pillow from Lourdez Perez, cookbooks, foodie greeting cards by Austin's Blue Corn Press, MAMAZ market bags, and other unique items. MAMAZ will also have small graphics, bags, aprons, quilts, and tortilla cloth holders made by indigenous Oaxacan women for sale. Tickets are only $35 and are available at El Sol y la Luna, Tesoros Trading Company, and La Peña. Seating is limited, so you're encouraged to buy in advance. This is an amazing opportunity to sample cuisine from one of the gastronomic meccas of Mexico and contribute to a worthy cause at the same time.

Posted by WWW.luisarestrepo.com at 6:23 PM 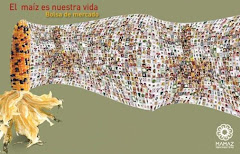